Mecademic robot arms are the most compact and precise industrial robots on the market, easily integrated even in the most confined and complex applications. They are intended for industrial use in a wide range of applications including precision assembly, testing & inspection, microprecision positioning, pick & place, and dispensing. 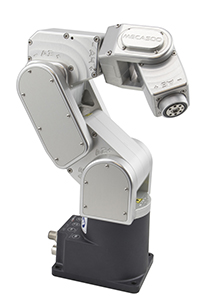 The Meca500 is less than half the size of other small industrial robots, and its controller is embedded in its base, eliminating the need for a bulky external cabinet. Built with precision machined aluminum and zero-backlash gearboxes, the Meca500 is the most precise six-axis robot arm, boasting a repeatability of 5 μm.

Smaller than any other industrial robot and with an embedded controller, the Meca500 is unbelievably compact and easy to mount in any orientation.

Equipped with zero-backlash gearboxes, the Meca500 utilizes it's 5 μm. repeatability to any assembly, machine tending, or pick&place application that requires absolute precision.

Designed as a plug‑and‑work automation component, the Meca500 is particularly easy to interface with any computing device such as a PLC or a computer. Programmed through an intuitive browser-based programming environment.

The MEGP 25 miniature electric parallel gripper is fully integrated with the Meca500 six-axis industrial robot and can be controlled directly within the stream of commands used to control the robot arm. With this unique ultracompact gripper, you can not only open and close the fingers but also control their speed and the force they exert (in both internal and external grips).

The gripper is supplied with an adaptor plate for the Meca500, but without fingers so that they can be customized for any application!

The Meca500 is the world's smallest, most compact and most precise six-axis industrial robot arm. As well, unlike the typical industrial robot, which is a complex, stand-alone system that is to be programmed via proprietary programming language and browser-based interface, the Meca500 is controlled as an automation component, much like a smart electric gripper.

Reach out to Gibson Engineering to test out the Meca500 for your next high-precision robot application!